Home News A Story of Regret… 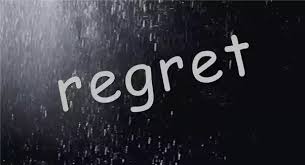 This is a story about a woman who cheated. And the regret she still carries to this day.

As I share a tiny glimpse into this woman’s life, her feelings, and her soul, I want you to know that she was scared to talk to me.

She, like so many others I have spoken with over the years, had a difficult time talking about the past. Their mistakes. Their regrets. The hurts…inside themselves and what they caused others. Actually, when I first reached out to her, via another wife, she did not want to talk to me at all. But like my marriage, and most other things I deem necessary, I don’t give up easily ;). Especially when I know that sharing a story… with people who seek hope and understanding, would be like cracking open a live eggshell of reality…into the real mind of a midlife crisis.

Being able to offer that to you…is exactly why I do this.

So…I calmed her, and assured her that I was not interested in hurting her or opening old wounds. I was only interested in hearing the secret insight that she could detail regarding the state and blueprint of her mind during the time when she made the decision to leave her husband so long ago. I also created a purpose, that her bravery in sharing her story would help so many others navigate their own life. Awareness is the first step in taking action so we don’t make similar mistakes. It also shines a light on insight and understanding for the spouse they lost that they are trying to bring home.

I told her that the actions & choices she made years ago were exactly that, years ago….in the past. Time and choices paved the way to where she is right now. And today, as a grown sensible adult with eyes of wisdom, she clearly recognizes the mistakes she made as a young married woman.

She told me that the pain she caused others, even though time has passed, still bares ugly fruit. Pain. Guilt. Resentment toward her old selfish self aren’t going anywhere.

Perhaps we can start at the beginning….

When Sisa was 7, her Mother died of cancer. She was the baby of the family with older brothers and a sister, who she remains close with today. After her mom died, her dad was single for awhile till he remarried when Sisa was 12.

I asked, “How was that new “step” marriage?”

She said, “Rocky at best. But the marriage lasted.”

When Sisa went to college she connected with her friend Dan (Dan and Sisa knew each other in High School) (he was a freshman while she was a senior) (but they didn’t get to dating till they were in college). Then, there, in college, they fell in love and planned a life together.

After college, Dan proposed and just a month before the wedding, Sisa’s stepmom was killed in a horrid car accident. At the time, many family members/future wedding attendees came out for the funeral but couldn’t come back to attend Dan & Sisa’s wedding. Sisa and Dan got married anyway, and at 26, Sisa, a new bride, says life was good…really good. That was until three years later when Sisa’s dad died in another tragic car accident.

That was the beginning of the end.

Sisa says, “I just lost it. I lost me.” Losing her dad, after losing her mom and stepmom, made her feel alone, numb, empty and feeling like she was not really connected to anything. She felt completely abandoned.

As an “orphan” Sisa turned inward, toward sadness and self pity, and although she was close to Dan’s family, (she loved her mother-in-law like she loved her mom) that love wasn’t enough to make her feel “whole” and “safe.” Clearly Sisa felt something was missing. Void. And all she wanted was to feel better.

During this challenging time, a man Sisa was close to, started complimenting her with words of “You are so beautiful” and “You’re so sexy.” That was all Sisa needed. She felt loved and important and she was smitten.

Soon this man began offering her dinner and fun outings and she fell for all of it! Then one night, she dove in completely and had sex with him. That night, 100% sure she was madly in love and that her marriage to Dan was a complete mistake, she returned home late that night and confessed to him everything. She was in love with someone else.

Sisa now says, “The horrid look on Dan’s face when I told him I cheated on him will be imprinted on my brain forever…I will remember his devastated face forever.”

This as we know was the beginning of a crisis for Sisa…and as we all know, and what I teach here…. (and as Sisa has since discovered) she was in the state of what they call “Limerence.”)

Soon Sisa moved out and, even though she was still with the other man, she diligently went to therapy with her husband to help him ease his pain…but in her head, she was done, already gone, in love with the other man.

Sisa and her hubby separated, and Sisa began a new journey with this man, that is until around the 18 month-2 year mark, when Sisa said she started feeling something was wrong…and then…she started to panic.

This new man really wasn’t as wonderful as she originally thought!! They were fighting and that romantic-whisk-me-away thing he once made her feel…had vanished. Sisa says, “We started doing life and life wasn’t easy. He just wasn’t the guy I thought he was.”

Sisa began to think about and wonder about her ex-husband?

It was about that time too that she sat down and wrote an apology letter to both her husband and her ex Mother-in-Law. She wrote and apologized for all the hurt she caused both of them as well as the pain she caused all of their extended families.

Remember, Sisa didn’t have a mother, Dan’s mom was the female role model and person of influence to her. Yet that person wasn’t enough for her to stay with Dan.

Also – just to note, I did ask Sisa about both extended families and all the love she had for so many of them… “Wasn’t the love enough to keep you from divorcing your husband?” I asked.

“Nope. I wanted this other person…the pull was too strong,” She said with a strong sigh.

Sisa attempted to go back to her hubby and by then hubby was already seeing another woman…whom he married and had 3 children with. In fact, he and that other woman are still married today. Sisa now wonders if he hadn’t found that other woman, would they have reconnected? She will never know.

Sisa ended up back with the affair man for 6 more years….until they broke up and she didn’t see anyone else for a long time…she dated a bit. Then she found another man. This man ended up being her second husband. And after some time being together, his mom died and then a month later he ended up cheating on her. But they stayed together. And although she never gave up her will to be his wife, out of the blue, he woke up one morning and said he was leaving. To date she hasn’t seen or heard from him again. He literally ghosted her… sending her divorce papers through the mail.

Ashamed and full of regret. She knows she did so many things that were out of character saying, “I never cheated on anyone in my life. We were a strong catholic family. I can’t make excuses and I can’t explain what happened…it just took over me. At the time I blamed him and would never admit I cheated….not even to my own sister. I continued the lie until 10 years had passed.

She now says, “The man I left was a great man…the best man I’ve ever had. All the other men I dated since were just broken…broken birds.”

Recently she heard that her first mother-in-law had passed away. Sisa went to the funeral. There, at the reception, she saw her first husband. It was awkward, specially to see he is still married to the same woman. He went out of his way to avoid Sisa and only spoke to her in passing for a few seconds.

But his family, in general, were all very nice and welcoming. In fact, his sister told Sisa, that the apology letter Sisa wrote to her mom, Sisa’s Mother-in-Law so long ago? His mom kept that letter in her nightstand till the day she died. The sister told Sisa, “My mom loved your letter!”

Sisa cried. The regrets of hurting him, his mom, the regret of being a lier, disappointing family, and hurting so many was too much.

Sisa says, “I blew up my life and I didn’t even know it….But I can’t blame anyone but me.”

After our interview, I deeply thanked Sisa and I told her we would all pray for her and wish her well in her future. And that is what I ask here of you. Will you please, if you are a praying person, would you please pray for Sisa? And if you aren’t a praying person, can you send her good thoughts and feelings so that she heels and forgives herself?

My hope for her is that she finds and can give unconditional love….to herself first and then to others. Love starts with YOU first. Then when you have yourself all set, then and only then can you be open to giving to others. But the foundation starts with you.

Funny note about Sisa? She said she only wished she knew I existed several years ago…because maybe with the skills I teach in my sessions and videos, she would have been able to save her second marriage.

I wish that too..and I told her “good things are coming….so if you need me, I’m here.”

If you or anyone else is struggling right now, reach out to me, we can set up a strategy to get you on the right path to get your hubby home and your marriage back on track.

Until then…peace and love to you always.

How To Live Fearlessly…

TheWifeExpert - June 10, 2019
0
Married 64 years, Fish and Frieda were a couple to notice. The had to be the oldest looking people I noticed at the airport yesterday....